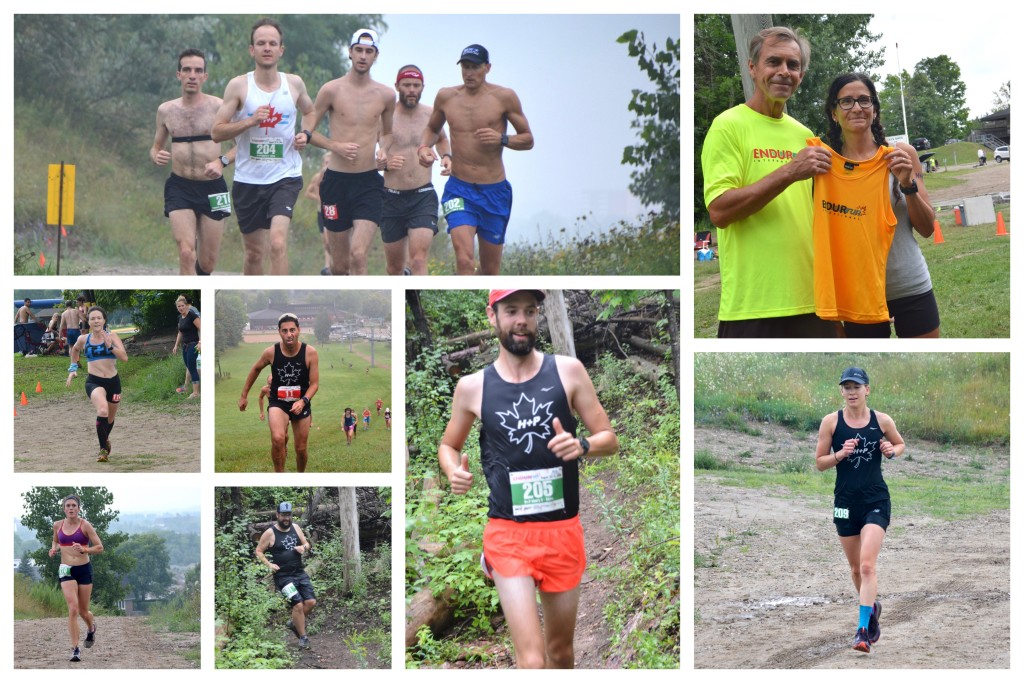 Another day, another exciting set of performances from H+Pers in the relay! FULL RESULTS.

Coach Dycemaster kept his squad in contention for a new team record with a very solid 2:20.  Luke brought the Masters Men back into 2nd OA with a 2:22 finish.  Jessica had a solid run on tired legs to build on the Women’s A-team lead in their event record-chasing pursuit.  A solid run from Ken on an injured knee held their squad strong in 4th OA, with Men’s B closing some time with Adam Dixon’s 2:45. Emily D had a great women’s relay best of 3:34 to bring the Women’s B into 7th OA, while Jody Rice ran a very solid 2:47 to put the Men’s Masters B in 6th.

In the Men’s A and Women’s B vs. Women’s A and Men’s B challenge, Emily and Dycemaster were able to finally break away from their competition with a 25 minute gap on Jess and Adam.  Full Results.

The World had a VERY strong performance today, showing that this competition isn’t over yet!  Terry, Jon Gascho and Ken Cooper were able to close 25 minutes on the Masters team, despite awesome runs from Michelle, Luke and Jody.  The total gap now sits at 52 minutes with almost 1/3 of the mileage for this week still to come! Full Results.

The event record is now looking out of reach for the Men’s A-team, but they are STILL just under 2 minutes ahead of 3rd OA and team record pace.  Can Brendan and Nick pull it off in the final 2 stages??  Full Results.

Jess was able to build just under 8 minutes on women’s relay record pace.  These ladies now look primed for a new event record as they sit with a 15 minute gap- now the fight is to stay on the podium with strong marathoners anchoring the teams behind them!   Full Results.

Luke took Chicopee on short notice but still managed a solid 2:22.  These boys sit strong in 2nd OA, but are 11 minutes back of record pace.  It ain’t over yet though, with strong runners in Dem and Merzi lined up for the 10K and marathon!  Full Results.

The masters women continue to battle hard.  Two of their strongest runners, Christine and Robyn, are primed to anchor this squad to the end! Full Results.

This C vs. B battle just got even MORE interesting.  The two squads sit 5 minutes apart after 5 stages.  Will Aidan and Jordan be able to recover from a tough start for the squad and bring the B team into 4th…or even the podium? Full Results.

Aidan was able to put a little more time on Dave’s 2012 performance…but 5 minutes can disappear really quickly if things go wrong in a marathon! Full Results.

After Will’s solid performance at Chicopee, the Funatics are now about 30 minutes ahead of Funatics pace from 2016- great work team!  Full Results.

With a very strong run from Jody Rice, the Masters Men B team showed they still aren’t going down without fighting to take down the A team of 2016!  At this point they are only 9 minutes back with two very strong anchors in Graham and Holger! Full Results.

What an epic day in the ultimate battle!  Val threw down an extremely strong 2:25 PB to launch herself into gold after 4 stages of trailing Robyn!  Robyn fought tough right to the end to hold her position in 2nd OA with a 2:35.  She now sits about 7 minutes back with 52.2K still to go!  Vicki and Rebecca also both ran strong to maintain their positions in 3rd and 4th OA!  #HPGirlPower

On the men’s side, there was some interesting shuffling as well!  Aidan built on his commanding lead in second with a 2:10 finish.  Nick was able to pass his rival Dave BUT Christian ran a very strong 2:20 to move from 5th to 3rd OA.  Nick is now 2:44 off of the podium!     Full Results.

Merzi fought hard to still hold his place in the top 15, making sure H+P still has 8 in there!  Ian and Thaddeus both had very strong races of 2:25 and 2:32 respectively.  There is now only 5 minutes separating the two!  Full Results.

Review all of our rosters and team challenges HERE.