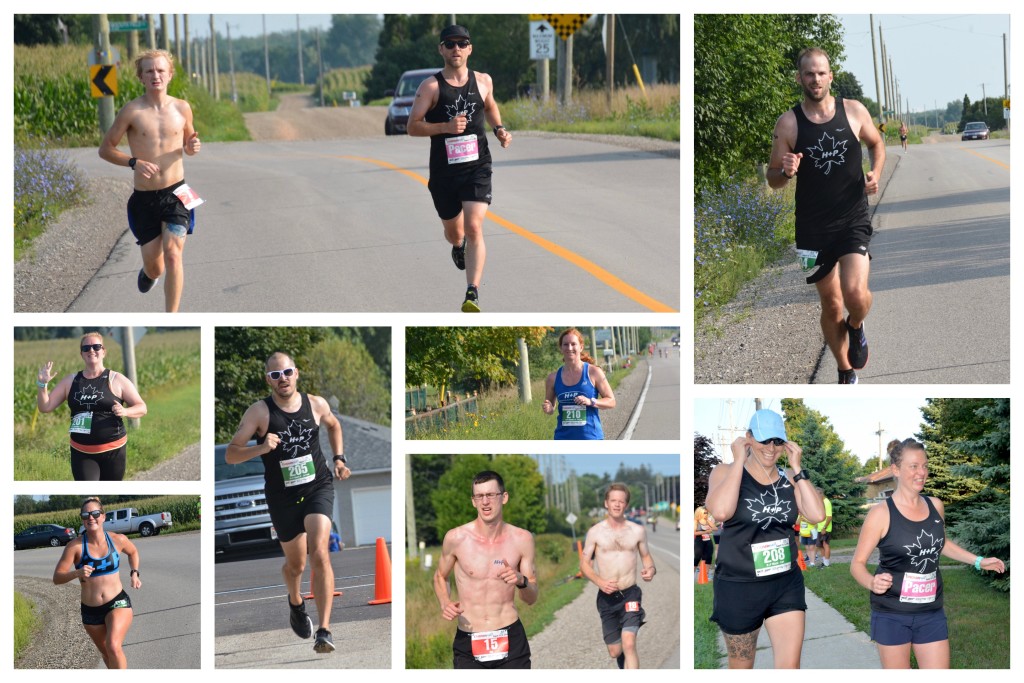 Another day, another exciting set of performances from H+Pers in the relay! FULL RESULTS.

Brendan of the Men’s A-team hammered a relay-best 34:45 to keep their team in 1st and give them a fighting shot at the club record.  Dem ran an outstanding 37:56 to keep the Masters Men in 2nd and within striking distance of the masters event record.  Kailey of the Women’s A team ran a strong 42:36 to keep them on women’s record place and hold them in 3rd OA.  Jordan of Men’s B lost almost nothing to Matt (who threw down a massive PB) of Men’s C- there is only 3:27 separating these teams going into the marathon!  A strong run from Joel on the Men’s D team brought them back into the top 10.

In the Men’s A and Women’s B vs. Women’s A and Men’s B challenge, Brendan and Payton gapped Jordan and Kailey by a mere 38s. There is now a 41 minute gap in this super challenge…with two very strong runners in Aidan and Vicki ready to roll to see if they can shut it down!  Full Results.

The Masters vs. The World competition ain’t over EITHER!  The world was able to gain some time in the 10K on the shoulder of great runs from Graham (43:36), Christine (45:12) and Dem (37:56), but there is only 1:19 separating the teams in this super challenge with extremely fit and ready to roll ultimates (Rebecca, Ian, Thaddeus) ready to fight for The World. Full Results. 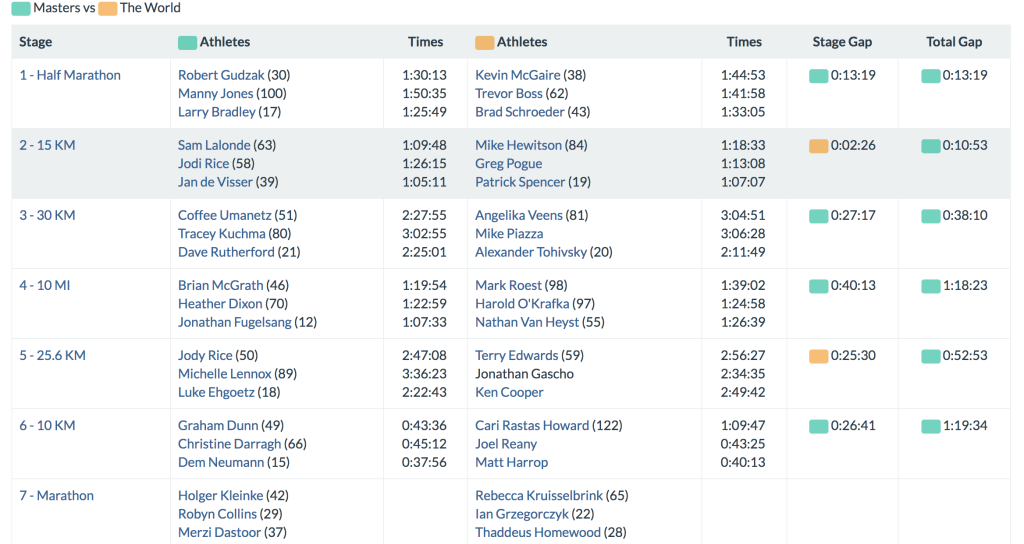 Brendan absolutely lit up his stage, and the boys will now need a very lofty but not impossible 2:55 marathon from Nick to break the club record! Full Results.

Kailey was on par with Robyn from the record breaking squad of 2016, so now Vicki will need a tough but again doable marathon of sub 3:28-ish to break the event record!   Full Results.

A solid run from Dem means Merzi (like with our other teams) will need a STEEP but doable time (this being 3:15) to break the event record!  Full Results.

The Master Women, while out of record contention, are still in the running for a great performance, especially on the shoulders from their all-star Robyn Collins.  How much can they move up in the standings with a strong run from her? Full Results.

Can the B-team complete the comeback and make up 6 minutes on the C-team to come into 1st?  How about make up ~35 minutes to pass the Women’s A-team for 3rd place on the podium?  The possibility is THERE!  Full Results.

Aidan was able to put a little more time on Dave’s 2012 performance once again!  He now sits with a 6 minute lead. Full Results.

Laura ran very strong at just over an hour. The Funatics are now PRIMED to take their team’s challange win…can Brian finish it off in his marathon debut?  Full Results.

Graham dropped the hammer despite minimal training, and this squad now sits a mere 7 minutes behind our 2016 A-team..amazing!  Full Results.

Lots of great runs, but not a lot of changes in the results today!  Aidan still sits 2nd, with Nick still in 4th!  Val, Robyn, Vicki and Rebecca are still 1-4th OA.  Merzi, Ian and Thaddeus all ran strong to maintain 8 H+Pers in the top 15!

We don’t normally have to do this during ENDURrun..but there were some MAJOR PBs and club standards hit during this stage! Full Results

Review all of our rosters and team challenges HERE.