Our previous post crashed, so we had to start a new one for the remaining stages!  Check our previous recaps HERE.

And just like that, 2019 ENDURrun has come and gone!  What a year it was!  It’s impossible to thank all of our team enough for putting themselves out there and pushing their limits.  Here’s our summary from the last day with way too many missing highlights!

What an awesome finish it was for the team!  In the end, Aidan finished 2nd OA for the team with the 8th fastest ENDURrun time of all-time (with only 2 individuals ever running faster).  Along with strong marathons from Nick, Ian, Dave, Robyn, Reza and Thaddeus, 8 H+Pers cracked the top 10 after an unfortunate drop-out form Josh Bolton due to injury.

Also a massive props to Will for taking an epic 2 hours and 12 minutes off of his ENDURrun best from 2013!  This is also good to earn him the first ever H+P 5-star PB award!

On the women’s side, Robyn had the unfortunate luck of going the wrong direction in the marathon and adding 2K total.  In the end, she was still more than quick enough to win her first ENDURrun and finish the week in yellow!

Vicki and Rebecca- both coming back from injury- hung tough and ran smart to make it 3 H+P women in the top 5!

After 7 years of trying, the Men’s A-team was finally able to put together a strong enough week to hit the all-time ENDURrun record!  It wasn’t easy as it came down a mere 43s gap and an epic finish from the team anchor Aidan Rutherford.

Despite the extra distance on Robyn’s marathon, her 3:19 finish was still strong enough to set an event record by over 17 minutes and to put this strong squad in 4th OA on the week. Props to the Women’s B-team for placing 7th all-time and beating some of H+P women’s A-teams from the past!

The men’s masters team had a gritty final run from Dave Rutherford, who like his son, was also able to bring his team in for an event record.  In the end the masters men set a time just under 5 minutes faster than the previous record from 2018.  Masters B ran strong to post the 5th fastest masters time of all time ahead of some of our previous masters men’s A-steams.

On the overall podium, Men’s B had a very strong 3:01:46 anchor from Alex, bringing his team to 2nd OA and claiming top prize money.

In the end, Team World was able to get revenge from 2018 and defeat the Masters super team.

The Men’s A + Women’s B team battled hard, but were unable to match the hard charging Robyn and Alex of Women’s A Men’s B on the final day.

Men’s D put up a valiant fight against Men’s C and showed why you run races rather than rely on predictions!

Congrats to everybody who helped make this week happen. 12 teams with 84 athletes does not happen without a bunch of amazing people making sacrifices and coming together, and we all appreciate it so much.  Enjoy your recovery an onwards to our big fall goals! 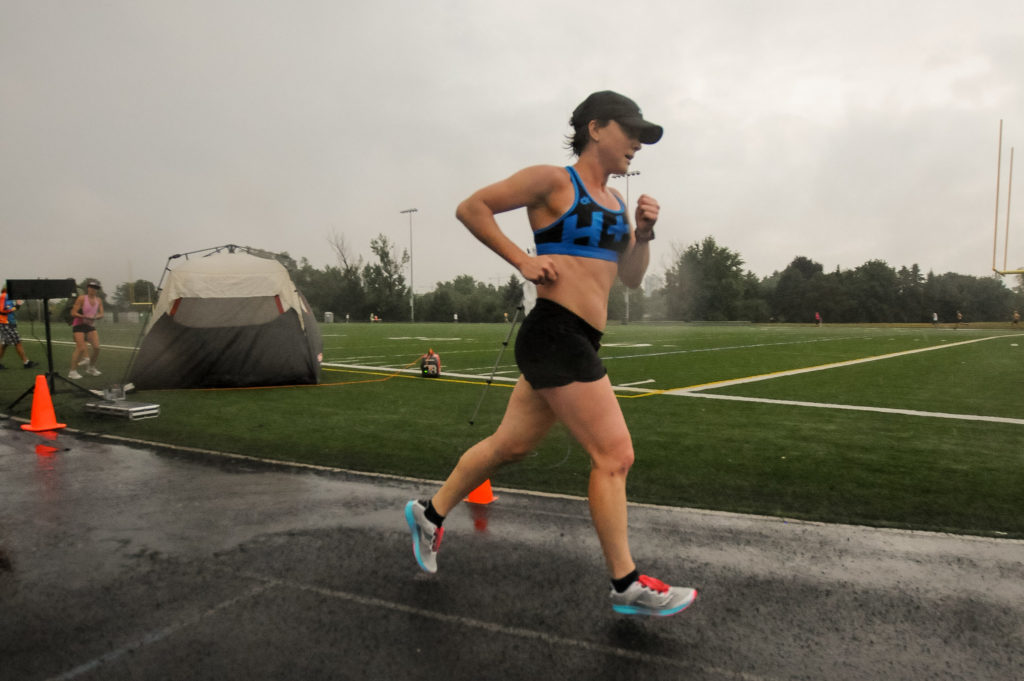 It’s hard to believe, but there is only 1 stage to go!  What a cool experience it was seeing these races unfold in their entirety at the inaugural ENDURrun 10 000m track race.

On the women’s side, Robyn sits comfortably in 1st OA.  Rebecca and Vicki are still 3-4 with a mere 58s separating them after 6 stages.

Lots of interesting stuff happening in the relay.  After a strong 35:31 the mens’ A-team are well on club record pace and sit exactly 1:01 behind ENDURrun event record pace.  Aidan is anchoring the team but will need to run a very speedy 2:51:34 to make that record happen.

The show down for 2nd OA and top prize money is going to be exiting.  Women’s A sits 14:37 back of mens’ Masters A, while Men’s B is only 1:16 behind the women’s squad.  With strong anchors across the board (Dave Rutherford- Masters A, Robyn- Women’s A, Alex T- Men’s B), this is going to be fun to watch!

Merzi ran a strong 10K to keep his masters men’s A team on event record pace.

Team world (Matt, Josh and Jessica) had very strong 10Ks to put their lead up to 28 minutes over the Masters super team.

The Men’s A + Women’s B team took time back with strong runs from Brendan and Jessica- what a back and forth battle this has been.  There is now 9 minutes separating thees two teams.

All Fit No Quit had a strong run from Jenn as they still sit ahead of team Dalton.  If Will has the race of his life, he can also help them take down the best Funatics team H+P has ever seen!

Robyn had a very solid 2:32 performance.  Catherine was the 1st ultimate to cross the line, but Robyn is still holding a 24 minute lead OA.  Vicki topped Rebecca for the second stage in a row, but Rebecca still holds a 1:21 lead- this will be quite the battle for 3rd!

In the overall standings, Aidan absolutely threw down a solid 2:03 to really solidify his position in 3rd OA.  This also put him in line to post one of the top 10 fastest ultimates performances of all time.  Nick still stands 6th OA.  Ian really hammered today, passing Dave for 7th OA.  Reza and Robyn still sit in the top 10.  Antoine had a very strong performance to jump all the way to 14th OA! 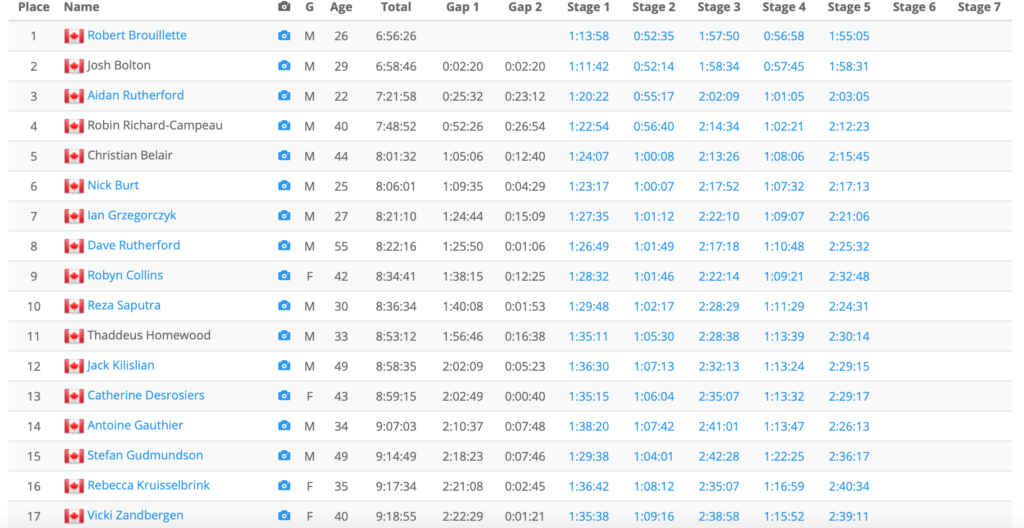 In the relay, Greg Dyce battled hard through an epic sufferfest to salvage a time of 2:18.  The Men’s A team now sits 2 minutes behind event record pace- this will come down to the wire!  They are ahead of club record pace by ~8 minutes as well.

Vicky Siemon once again crushed a stage for the team, launching their team to 9 minutes ahead of record pace. This also puts the women’s team 1:20 behind men’s B for 3rd OA!

Once again, the men’s masters squad is proving it’s simply better than ever.  Jon Fugelsang bolstered their lead on event record pace and gapped men’s B to hold 2nd OA by a 13 minute margin.

Brandon, Lumi and Ken had very strong performance for “team world,” putting their team back in the lead by 15 minutes in this back-and-forth challenge.

Vicki S and Adam Dixon had strong runs to put their team back into a commanding lead vs. the Men’s A + Women’s B team.

Men’s D had a very strong run form Brandon.  Despite a massive PB from Ken Cooper, men’s D still hold a lead in that challenge.

Meredith had an outstanding run for All Fit No Quit, as they still hold a 23 minute lead over Team Dalton.

As always, let us know if there is a challenge we missed!